“ The Ayon is a masterpiece of High End design and execution. ….Anne-Sophie Mutter’s violin sounds richer on the CD-35 than on the other players, and has impressive fluidity and texture”. 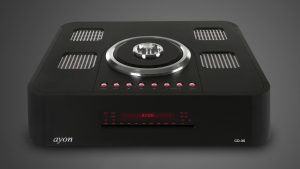 SUMMARY: The Ayon is a masterpiece of High End design and execution. Its few, very modest weaknesses are more than balanced by huge strengths, so let’s deal first with its sound. Initial listening compared to the T+A and Esoteric was simply too close to call. It took longer, quite a lot longer, to find that it lacks the last 5% of definition, both in detail and timing. But it is kinder to poorer recordings, makes voices sound angelic, and will sustain long, long listening sessions. With Lalo’s Symphonie Espagnole (CDC 7 47318 2) Anne-Sophie Mutter’s violin sounds richer on the CD-35 than on the other players, and has impressive fluidity and texture.

EXTENDED REVIEW: Are CD and SACD as dead as a dodo, or they the beating heart of high end audio? Perfect sound forever, or nails on blackboard? Precious collectible physical media, or cheap plastic dross? The point of these questions is that newcomers like cloud-streamed and NAS-served files is making us re-think our relationship with the silver disc, which has been the de facto king of the hill for nearly forty years now. Sure, we’re all playing with data files and its super-cool vocabulary, ripping WAVs to NASs, streaming FLACs to DACs, replaying DSD through USB and all the rest of it. But all that is a very different to relying entirely on non-physical media because, despite claims to the contrary, the whole thing just doesn’t work quite reliably enough to allow us that essential zen-like connection with the music.

Add in the knowledge that this generation of players can make the silver disc sound better than ever, and mindful of the sheer quantity of music available in CD/SACD, a strong case can be made that the silver disc is just as current as ever, despite the invasion of the file-snatchers. Sure, its place in our rigs is changing subtly but as Chardin’s Third Law of Technology states: “Old technologies never die; they sublime to the sacred”. Just so. CD has joined vinyl as a simply wonderfully retro way to listen to and revere music. Listen without prejudice to this group of disc players on test, and it’s shock’n’awe all the way. So you’ll probably be needing some insight into your next CD/SACD player purchase. Secretly you want a dreadnought-build player much, much more than a poxy laptop, a hard drive in a sardine tin and a bunch of perfidious ‘computer says no gremlins’ ruining your evening.

The first assumption for this survey is that, since a high end DAC is now virtually mandatory, we might as well get a disk player in the same box, and keep open the options on when (or whether) to rip those CDs to a hard drive. The second assumption is that we’re going to spend high-end money for a heritage product that should outlast us. These, therefore, are not cheap; they’re built for the long haul.

Ayon is an Austrian company with a product range that stretches from leading edge digital through to speakers. Most of them use valves and most of it is black – very black, but with silver highlights.

Owner Gerhard Hirt agrees with us about the future of the silver disc: “In view of the still very popular CD and its high market share (even in 10 years there will be new CD-players, merely because of the factual existence of millions and millions of CDs and considering that, for example, in Germany circa 60% of the income of the music industry results from CDs), and because of the still good demand for exceptionally designed CD players, particularly with tube output stages, we have decided to launch a new SACD/CD reference top model.”

This CD-35 is its latest CD/SACD/DAC offering and our sample had two additional upgrades from the base model. The first is an analogue pre-amp section, with a fully balanced, discrete-resistor volume control and three analogue inputs (1x XLR + 2x RCA/phonos). The Signature version has a DSP module that converts all PCM material (including CD replay) to DSD, and then upsamples DSD from 128x to 256x (switchable). It also has some Mundorf Silver/Gold capacitors. The back panel is clearly laid out and easy to access with excellent quality connectors.

The ergonomics are good rather than superb. As a top-loader its top panel must be exposed, precluding many convenient locations. However, using the beast is a joy. Lift the acrylic lid to expose the large bowl that’s warm from the valve heat, drop CD onto spindle, ease in the magnetic puck, replace the lid and off we go. Does it look good? That’s a personal judgment, though the black disappears nicely.

The specification and DAC connectivity is on the generous side of typical for the breed with no obvious gaps. The remote is a black plastic job that works well even if it is a bit pedestrian. During its stay here the CD-35 was kept on 24/7, worked perfectly at all times and despite being packed with valves, ran merely warm rather than hot.

With limited time and space available, this survey is going to concentrate on silver disc replay only and ignore the virtually infinite permutations of using the DAC separately. As with our previous survey on line stages, a mixture of panel and writer-only listening is used. The first thing to do was to investigate the various upsampling and filter options on each machine and then fix the preferred sound for comparative listening.

We compared both CD and SACD replay on a variety of recordings where we had two copies in an A/B switch input comparison. The rig used was: all outputs from XLR to XLR input to a Hattor passive control unit. Power amps and speakers were ATC 100 anniversary actives, with a B&W DB1 sub. The Ayon is a masterpiece of High End design and execution. Its few, very modest weaknesses are more than balanced by huge strengths, so let’s deal first with its sound. Initial listening compared to the T+A and Esoteric was simply too close to call. It took longer, quite a lot longer, to find that it lacks the last 5% of definition, both in detail and timing. But it is kinder to poorer recordings, makes voices sound angelic, and will sustain long, long listening sessions.

With Lalo’s Symphonie Espagnole (CDC 7 47318 2) Anne-Sophie Mutter’s violin sounds richer on the CD-35 than on the other players, and has impressive fluidity and texture. Am I making the CD-35 sound a tad valve-like? Probably, and here we come to the sort of problem that the high end is struggling with. Knowing that it was a valve piece, did my head make it sound like one?

Its strengths, however, lie in its analogue inputs and volume control which, frankly, put it in a class of its own. Want a creamy CD/SACD player, DAC and preamp in one modest, but darkly gorgeous box? And all at a very realistic price? Nothing else even comes close.

As a music-lover’s system centrepiece, the Ayon wins hands down. At its price it is a snip; because unless you have a T+A or an Esoteric to hand you will never notice that slight lack of definition, and if your speakers are of the Focal or Triangle persuasion you may prefer it that way anyway