At last year’s High End, Gerhard Hirt, owner and CEO of Ayon, introduced me to his new development in the area of ​​network players in detail and afterwards it was clear that we wanted to have this device tested as soon as possible. A few weeks ago it was time and we got the device exclusively for the test.

In our recent conversation, Gerhard Hirt told me completely relaxed that the S10 had actually already been done for about a year and you have deliberately used the time until the official appearance for fine-tuning. After all, the S-10 should be a “true Ayon” in every way.

From a purely external point of view, the S-10 can be recognized at first glance as a device from Ayon: solid, well-made, black aluminum housing with the characteristic rounded corners. The front panel is dominated by the large QVGA 5-inch color TFT display for displaying the various menus of the network player, which is still easy to read from a distance. Another small display to the right shows, among other things, volume, input, mute and balance. The S-10 is completely controlled via the included remote control. By eliminating any controls on the front panel, the S-10 looks very elegant, tidy and unfussy.

Technically, the S-10 connects to the well-known S-3, which has been on the market since 2011 – a long time for a hi-fi component in general and for a digital device in particular. I still have the sonic abilities of the S-3 in my best memory and sonically excellent components do not belong suddenly to the old iron. For this reason, the S-3 remains in the program of Ayon. On the other hand, a lot has happened in the digital sector in recent years: I would like to mention internet streaming services or the subject of DSD.

And this is exactly where Ayon has started the S-10. The streaming unit now consists of the new high-end streamer module “Stream 820” by Austrian specialist Stream Unlimited. This module contains a brisk 1 GHz Cortex-A8 processor as well as 4GB RAM and 4GB flash memory. Thus, sufficient computing power is available for processing PCM data in the formats WAV, FLAC or AIFF up to 24-bit / 384 KHz and DSD data up to 11.2 MHz (DSD256). The access to Tidal is already integrated as well as the Roon compatibility. Connection to a network is either wired through the RJ45 Ethernet port or wirelessly through the built-in Wi-Fi module. In addition, the network player has two USB inputs – one on the front and one on the back – for direct connection of a USB storage device, such as a stick or hard disk. In addition, the S10 still has a coaxial digital output (S / PDIF). 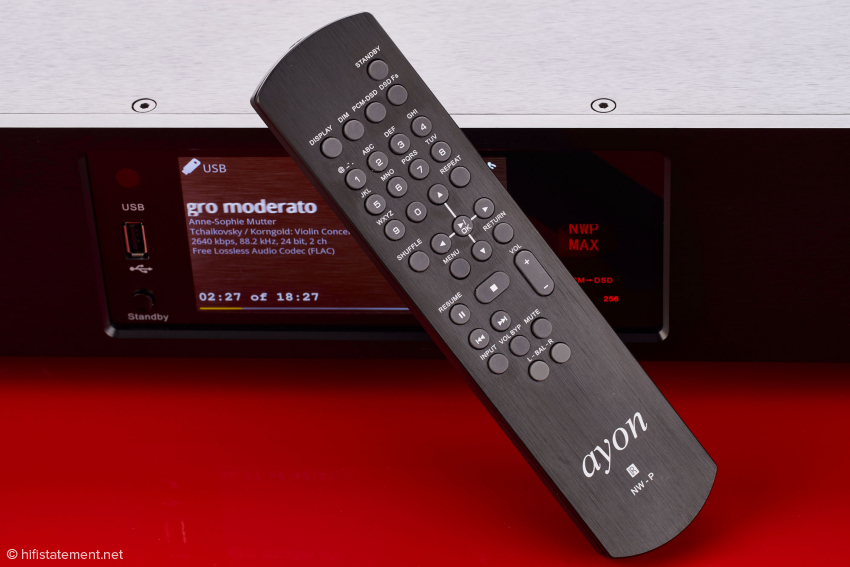 At the heart of the digital audio section are two high-quality Texas Instruments DSD1792A D / A chips in a channel-separated symmetrical arrangement. To connect external digital components to the DAC, the S-10 has three digital inputs: coaxial S / PDIF (RCA), Toslink and USB-PC “B” type. The USB interface is based on an XMOS DSP chip and can transmit PCM up to 24 bit / 192 kHz and DSD up to 128x.

In the analogue output stage, Ayon has resorted to a well-proven concept in the S-3: a puristic single-ended class A circuit with the well-known double triode 6H30 and only a few components without negative feedback. The balanced outputs are operated separately and in true symmetrical circuit. On the output side, either a cinch output or a balanced output with XLR sockets are available on the analogue level. A parallel operation of both outputs is not provided.

As a media server came on the one hand JRiver in connection with the app JRemote and the other MinimServer controlled via the in-house Ayon App for use. In addition, I have yet tested the interaction of Roon with the S-10. In all three configurations, the operation of the S-10 was a great pleasure. The streaming unit responds quickly and smoothly. Especially in the integrated streamers, I see one of the great strengths of the S-10: The sound result is excellent and you can do without a computer in the system. A comparison of MinimServer’s alternative signal path through JPLAY and my two cascaded Mutecs into the S-10’s USB input confirmed this result. In the long term you can not do without a good music server, because the S-10 mercilessly reveals the differences. An alternative to getting started with a not too large collection of music is the direct connection of a USB hard disk, because this results in an amazingly fine, airy and open sound.
I heard in the first step without DSD conversion. The S-10 opens a wide space with excellent depth graduation. Added to this is the excellent fine dynamics. Both together make good orchestral recordings with classical music sound impressive. Orchestra pieces such as “El Tambor De Granaderos” or “La Revolsta” from the album Music of Spain with the National Orchestra of Spain under the direction of Rafael Frühbeck de Burgos ( Music of Spain – Rafael Fruhbeck De Burgos Conducting the National Orchestra of Spain – HDTT 24/192), who live from the colorful variety of the instrumentation and the stupendous dynamics, sound fantastically in the interplay with the fantastically captured depth of the imaginary sound stage. Change of Scene: At the beginning of “How Long Has This Been Going On?” (Lyn Stanley: Interludes ), Lyn Stanley stands as if crystal-clear between the loudspeakers. One thing is clear, the S-10 does not have a soft tube sound. On the contrary: The live atmosphere of the all-time hit “Hotel California” from the album Hell Freezes Over by the Eagles is rendered extremely clear and transparent by the S-10, plus a crisp, rolling bass.

With great pleasure, I then heard again after a long time through the DSD Sampler Showcase 2 and 3 of OPUS 3. Especially with DSD recordings, I have often lacked a bit of dynamism in the past, so that everything sounded a bit dull and boring for my feelings. But now Eva Tylor “grooves” in “Everybody Loves My Baby” with an intensity that makes it really fun and the grip to the volume control does not fail. And suddenly my interest in DSD is back.

No, I will not now deal with the basic question PCM versus DSD, but limit myself to describe my listening impressions. Generally speaking, the DSD conversion gives a lot more shine to PCM recordings and maybe that extra bit extra. Also with regard to the depth of the spatial representation results with the DSD conversion an interesting effect. Compared to the PCM playback, it does not seem so deep to me, but the sound moves slightly forward and thus appears more present. At the same time, however, the spatial impression improves for me. A contradiction? Not necessarily, because the individual instruments are staggered much more natural and each instrument “breathes” and vibrates as it were in the room.

This can be heard very well in the first movement from the “Symphony No. 34” by WA Mozart in the interpretation of the Royal Philharmonic Orchestra under Josef Krips (Mozart: Symphony 35 & 41-Chesky). A recording in the best DECCA tradition with a nice soft sound paired with great space and at the same time enormously closed and compact. With the DSD conversion, the recording appears more present and everything looks a bit more airy. I attribute this to the distinctive ability of the S-10 to reproduce subtle nuances within a room. Thus, the spatial placement of the instruments in the interplay between the fast successive forte and piano passages, which characterize the first movement of this symphony, much clearer worked out. But not only recordings of large orchestras, but also recordings with chamber music ensembles benefit immensely from the DSD conversion. Take the string sonata by GA Rossini for two violins, cello and double bass (Salvatore Accardo – Rossini: 5 Sonata a Quattro – LIM UHD): with the DSD conversion the strings sound incredibly velvety and supple; You can hear the “breathing” of the musicians and feel, how fantastically the musicians interact with each other.

So far I have always chosen the conversion on DSD128. With the remote control, you can easily switch to DSD256 while listening. To my surprise, there is no further improvement here. On the contrary: the sound impression is now subjectively somewhere between the original PCM version and DSD128. But somehow the above spell of conversion on DSD128 is gone. One explanation could be that when converting to DSD256, much more data has to be moved, resulting in a significantly greater burden on the system. You remember: AAuch in the DSD module is a processor. More is not always better!

Up to this point we have been exclusively concerned with the conversion of CD quality to DSD.But what does it look like if the source material is PCM in HiRes? I consciously choose to record the Haydn Symphonies with the Philharmonica Hungarica under Antal Dorati (Haydn Symphonies No. 94 and 100 – Antal Dorati’s The Philharmonia Hungarica – HDTT 24/192), as I like this recording in both 24-bit / 176kHz in 24-bit / 352 KHz quality. Dorati makes Haydn music with chamber music. He prefers striking fast tempos and lets the orchestra play the symphonies with full force. This gives the symphonies an extremely lively character that is difficult to escape.The high-fidelity transfer of 24-bit / 352-KHz high-definition tape transfers from a two-track tape has been superbly successful. Tonality, dynamics and spaciousness are the finest. I could not imagine that the conversion of the 24-bit / 176-KHz version in DSD should bring a tonal gain. But here too, to my surprise, the same positive effects – airiness and spaciousness – come in, as with simple CD material. And the conversion to DSD256 in turn leads to a result that makes me prefer the original version in PCM 24 bit / 352 KHz.

I can not give you a conclusive technical explanation for the advantages of the DSD conversion.Perhaps one of the reasons is that the DSD signal after the converter, unlike PCM, requires only a relatively simple low-pass filter consisting of resistors and capacitors and does not require complex circuits with additional chips. It is known that this low-pass filter has a great influence on the sound. But no matter, we have our ears to rely on.

Finally, it remains to be stated that in the long-term test I had always activated the DSD conversion and found it particularly pleasant. Without a doubt, the sound quality achieved with the conversion to DSD is amazing. This applies regardless of the resolution of the starting material. But of course, CD-quality music in particular benefits from the DSD conversion. And who of us already has only recordings in hires in his music collection?

The Ayon S-10 is a great device with outstanding tonal qualities and exceptionally versatile with a perfectly matched network player, converter and preamp. You can not find that every day. But the DSD conversion option is the icing on the cake and makes the S-10 sonically extra special.