The Ayon Audio Scorpio is a heavy, Class A integrated amplifier made of high grade aluminum and powered by gleaming KT88 and 12AU7 tubes. One look and listen, and you know it’s textbook audio, the perfect answer to your friends when they say, “So how’s a high end amplifier any different from my Yamaha?” Like riding in a ’56 Chevy Bel Air or planting a winter garden, the Scorpio experience is time-honored and without pretension. Using the accompanying Ayon CD-07s compact disc player as a source, I paired the Scorpio with several speakers, including my Nola Contenders, a pair of Triangle Antals, and the new Eclipse TD508MKIII stand mounts. You couldn’t find more disparate sounding speakers, yet all of them benefited from the savory sonic grace imparted when paired with the Ayon Scorpio integrated. 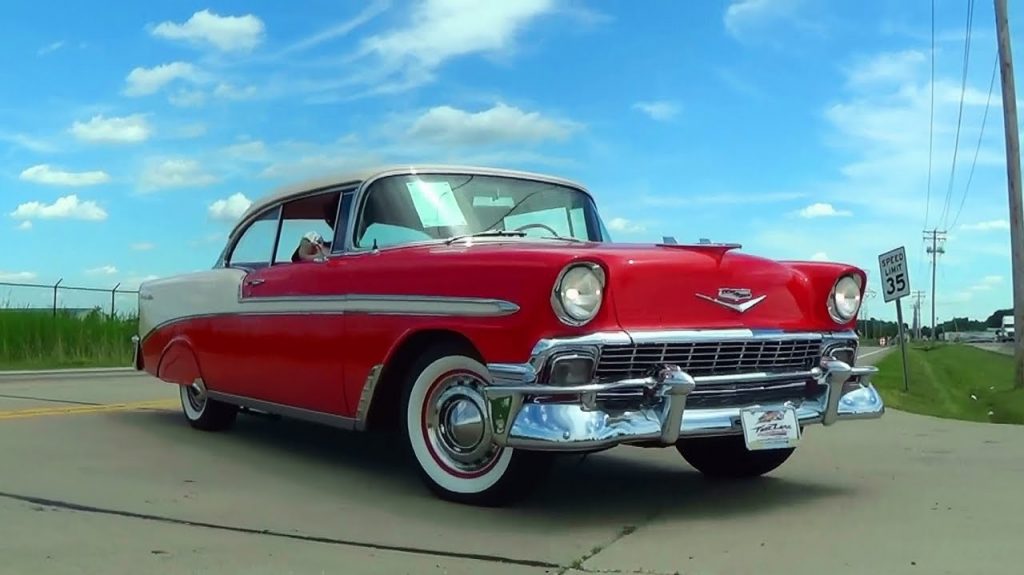 The Ayon Scorpio delivers an incredible sound for an amplifier at this price: Sumptuous tone, weight, and delivery, with plenty of power in reserve. Sonically, the Scorpio is a luxury sedan, guaranteed to deliver comfort and sophisticated ease. Some amps give you bumps and jolts and breathtaking thrills in equal measure. As much as I savor the latter, I’ve no patience for the former, especially when most of my music was not made with audiophiles in mind. The Scorpio integrated reflects the principles espoused throughout the Ayon line: “We believe that the simplest circuits work best together with the shortest signal path. The shorter the signal path is, the less possibility of sonic degradation from various sources, including the wire itself.”

Listening to the Scorpio and reflecting back on the Orion II integrated reviewed previously in this column, I can envision a circle of Austrian engineers, busily tinkering away to refine, but not replace, the sound of their entry level line. It’s been some time since I had the Orion II in my home, so who the hell knows for sure, but if pressed to it, I’d say that the Scorpio has a sweeter touch than the Orion II. The pure class-A Scorpio integrated has all of the exemplary features of the Orion II (switchable between pentode and triode mode, sequenced soft-start power up for extended tube life, power tube and electronic protection circuit system, 0dB negative feedback). The only thing missing is a little less power and the Orion II’s USB DAC (no great loss, if I remember correctly). Granted, at this price point there are plenty of worthy integrated tube amps on offer. Nobody, not even Ayon, can deliver everything for little more than four grand. Some manufacturers, therefore, aim for a lightning quick, highly transparent sound, where every cable switch and recording trick is as clear as glass: What’s good sounds good, and what’s bad, don’t. Other companies, however, attempt to produce amps that are on good terms with even the prickliest recordings. This is an oversimplification, of course, and few amps are firmly ensconced in either sonic extreme, but it is fair to say that the Scorpio aims to please. I find it to be a sound that is warm, gracious, and mesmerizing. 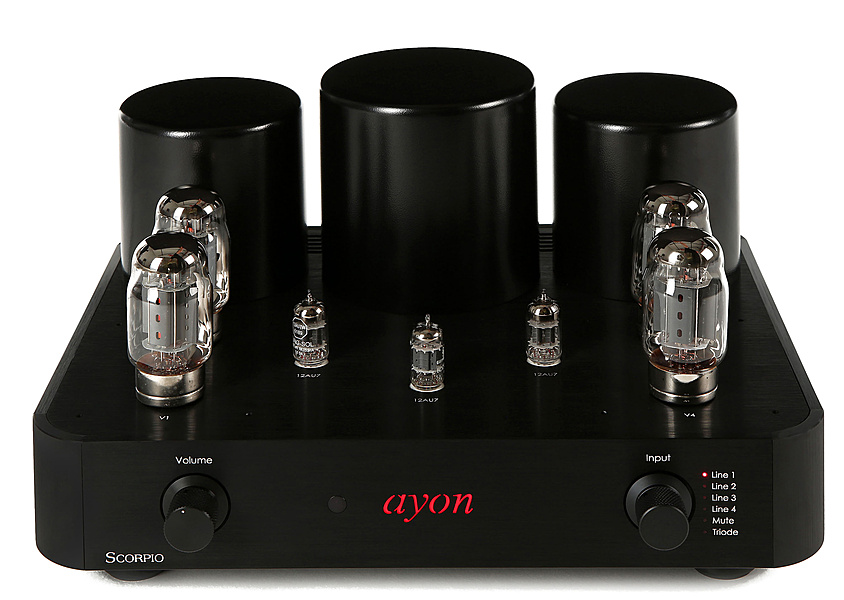 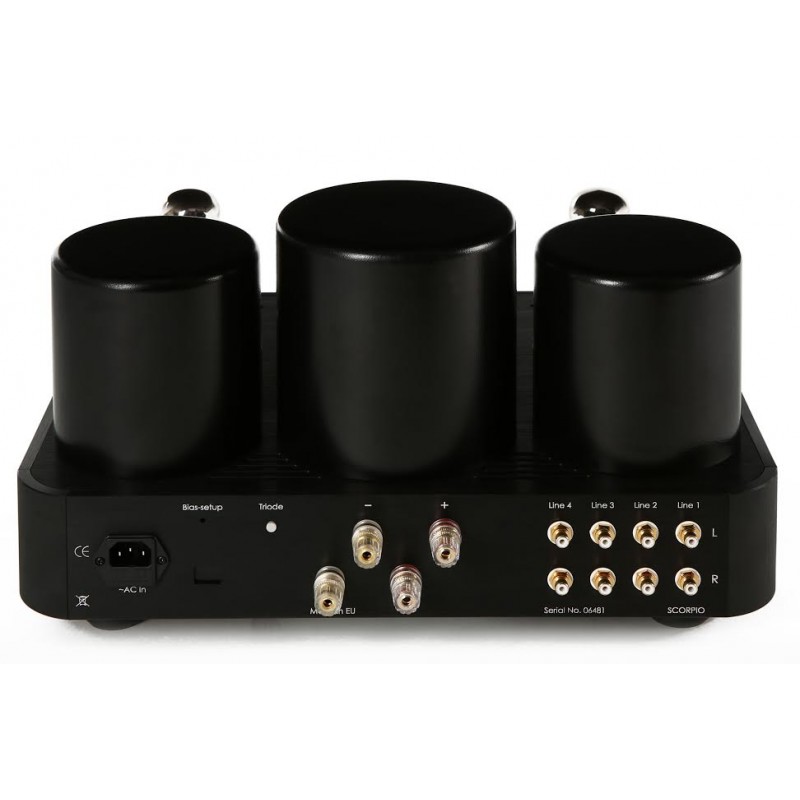 Moving on to talk about Ayon’s new entry level CD player, the Ayon CD-07s shares many of the visual and sonic traits of the CD-1sc Compact Disc player also reviewed in a previous column. Both are top-loading, Class-A triode tube output stage models, employing a Burr Brown D/A converter, upsampling at 24-bit/192kHz, with an asynchronous 24-bit/192kHz USB input. As a CD spinner, the Ayon CD-07s can be counted on to showcase CDs at their best: solid, articulate, and immediate. For those of us who turned dollar bills into jewel case columns of silver discs, the CD sound has tangible pleasures that escape the computer/music server experience. There’s vibrancy to the sound of a good CD on a champion player that makes it worth the effort to select and load the CD (such a chore for our modern selves, yet we endure the burden heroically!). To illustrate, the pounding middle section of the Mynabirds’s “What We Gained in the Fire” was dramatically better (stirring, even) when played via CD, as opposed to its downloaded version. Still, there are times when CD’s can sound as fake as rock candy. Fortunately, playing computer files upsampled to 24-bit/192kHz via the CD-07s USB input is superb. Normally, I’m a bits-and-all sort of fellow, but the upsampling was so successfully done that I left it on at all times. I don’t remember being impressed by the USB input in the CD-1sc model I reviewed earlier, but I certainly appreciated it with the CD-07s. I’m among the legion that finds a ton of new music via streaming, and the CD-07s is simply wonderful with tunes like “Can’t Take You With Me” by Canadian musician, Bahamas. Ok, so maybe the notes of the acoustic guitar are a tad overblown via Tidal, but complaining that such rich melodiousness is “untrue” is best left to those who hate this sort of sound, anyway. The CD-07s lists for $3950 (and can be found for less than that online), making it a real bargain for a CD player and DAC that performs at this destination-place performance level. 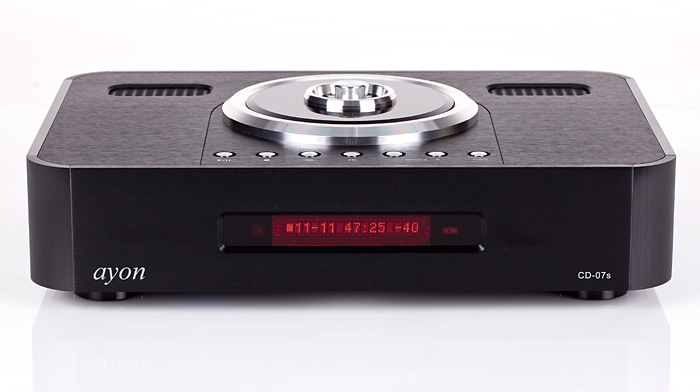 Like all Ayon products, both the Scorpio and the CD-07s are massive, black aluminum affairs with wonderfully illuminated displays, plenty of inputs, and come with satisfyingly burly remotes. All of this appeals to me (although, to be honest, I’m not crazy about top-loading clamps), and the sound is exactly in my comfort zone for long-term enjoyment of music. Like the Genesis tune, I know what I like and I like what I know, and I like both of these Ayon models. That they can be had for a more “affordable” price than the previous models is no small matter, either. Highly recommended for both.