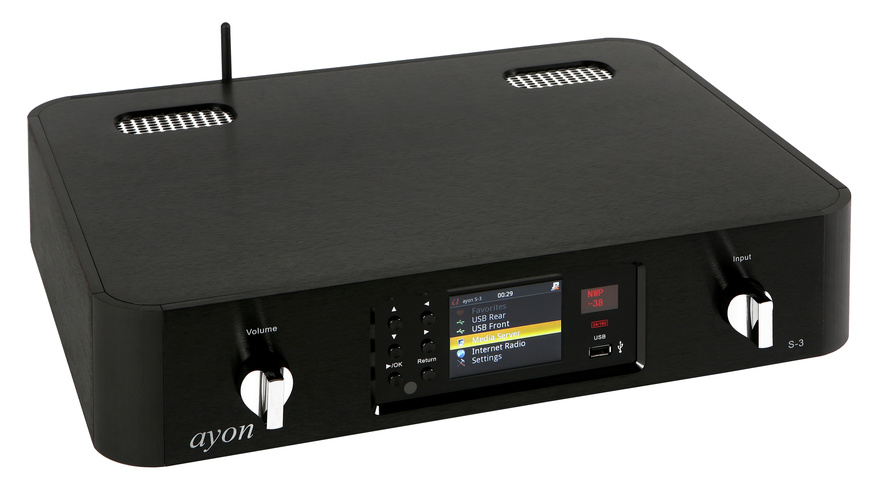 Digital-to-analog converters have experienced rapid development in recent years, and the days when music was hard-coded by high-end supporters are long gone.

In order to transport the music as lossless as possible from a mass storage device (NAS or USB hard disk) to the digital / analogue converter, it is necessary to use a bridge or a streamer or network player. For this one can use a PC on Windows, MacOS X or Linux basis, which is connected with the domestic network. However, the integration of a PC in the home stereo system under high-end aspects is anything but easy. A PC is not optimized for “pure” music playback; just think of the multitude of processes that take place in the background, switching power supplies that produce interference signals, and noisy fans. Even the commonly used USB connection with the digital / analog converter is easy to handle, but sound anything but problem-free. I am always surprised when I encounter very simple PCs off the rack even in extremely expensive systems that have not been further optimized. Not least because of these difficulties, but also for reasons of principle, it is contrary to many music lovers downright to integrate a PC in the home music system. 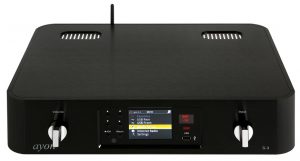 Another solution is specialized devices that uncompromisingly rely on pure audio streaming in the best possible quality with highly specialized components. Optimal way, the streaming unit is connected by the shortest route directly with a high-quality digital / analog converter. If the whole thing is then extended to a pre-amp with analog volume control and combined with a tubular output stage, you almost inevitably get to the Ayon S-3 or the bigger brother S-5 . The Austrian specialist for high-quality tube devices has no fear of contact with digital technology and has been working on streaming for many years. I was able to personally convince myself of the excellent know-how in conversation with the owner of Ayon, Gerhard Hirt.

The S-3 comes in a solid, beautifully crafted aluminum body that stands on four solid feet. The front consists of a 3.5-inch color TFT display and several small buttons that allow direct navigation through the various menus and your own media library. Another small display shows the selected volume, which is set on the left side with a large knob. 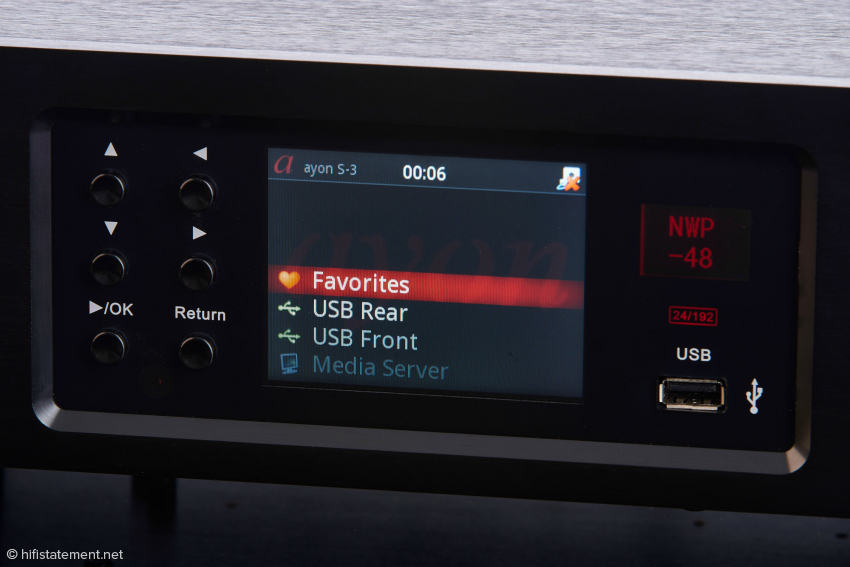 The easy-to-read display, with the buttons on the left man can make the most important settings

The different inputs are selected using the input selector switch, which is arranged symmetrically to the volume control on the right side. In addition, all important functions of the S-3 can be controlled via the remote control. If you look at the back page it becomes clear that the motto “Versatility and Flexibility” had to be used in the conception: There are four digital inputs for XLR (AES / EBU), RCA (S / PDIF), BNC (S / PDIF), TOSLINK (S / PDIF) and an I2S input, which is implemented via an RJ45 socket. All inputs accept PCM up to 24 bit / 192 KHz. In addition, the S-3 has two USB inputs – one on the front and one on the back – for direct connection of a hard disk or USB sticks.

The connection to a network is made either by cable via the RJ45 Ethernet connection or wirelessly via the integrated Wi-Fi module, whereby the transmission here is limited to 24 Bit / 96 KHz. In addition, the S-3 has a coaxial digital output (S / PDIF) for connecting a digital recorder or external D / A processor. 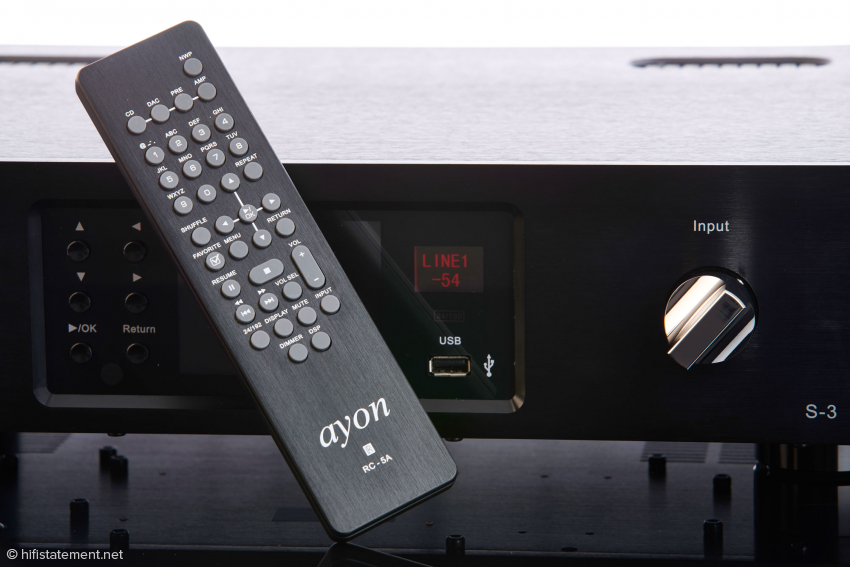 The remote control in a noble metal case

The analogue preamplifier has two RCA inputs and a cinch output for connecting a tape device. On the output side, either a cinch output or a balanced XLR output is available on the analogue level. With a toggle switch, the gain can be switched between high (+ 6dB) and low (0dB), so that the level relationships in the chain can be optimized. Another toggle switch allows you to choose between “normal” modes when connected to a preamp and “direct amp” when directly connecting the S-3 to a power amplifier. In the “Direct Amp” operating mode, the volume is automatically reset each time the power is turned on and the “max. volume “off.

Another practical detail on the back is the phase indicator, which makes the checking of the in-phase connection of the power plug particularly comfortable and makes the otherwise necessary use of a measuring device unnecessary. Ayon has always been committed to a clean and stable power supply. Two powerful R-Core transformers supply separate digital and analog parts. A total of ten voltage regulators ensure stable conditions and a decoupling of the individual modules. The power supply for the supply of the output tubes is constructed with rectifier tubes and subsequent LC filtering consisting of a large filter choke and capacitors. 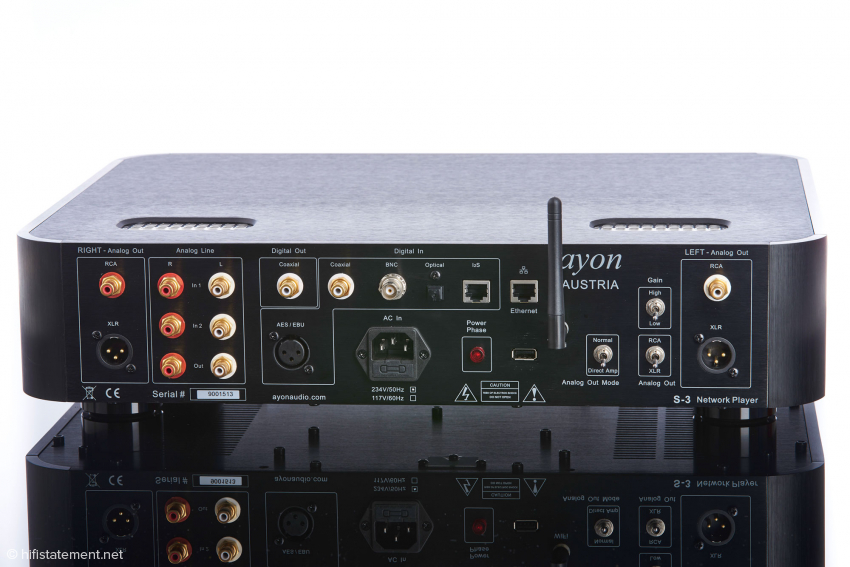 The versatile connection options for digital and analogue sources

The streaming unit was created by the Austrian specialist StreamUnlimited and supports the most common playback formats WAV, FLAC and AIFF for high-quality music reproduction up to 24 Bit / 192 KHz. The DSD format is not supported; If necessary, one would have to resort to other alternatives from the Ayon program, such as the pure network player NW-T. The digital audio section is built with two high-quality PCM 1792 D / A chips in a channel-separated balanced circuit. The fully analogue volume control uses the excellent PGA2320, which attenuates the signal with the help of a resistor network. The volume control can also be switched out of the signal path by connecting the S-3 to a pre-amp.

At the starting stage one is particularly proud of Ayon. It is designed in a puristic circuit with the well-known double triode 6H30 and only a few components without negative feedback. The balanced outputs are operated completely separately and in a true symmetrical circuit. If a power amplifier is connected directly, its input impedance should be 47 kiloohms or above, especially in the case of symmetrical control, so that there are no mismatches. The components used in the S-3 are invariably of very high quality with audiophile coupling capacitors from Jentzen and tightly tolerated MKP film capacitors. 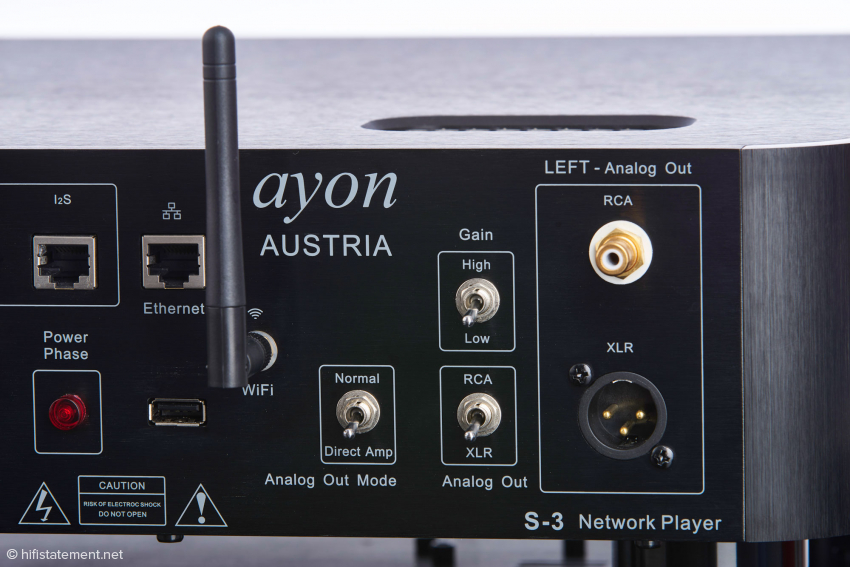 On the left, the phase indicator for the correct polarity of the power cord, next to the antenna for wireless connection to the network.

Since I wanted to focus on streaming with the S-3, I connected the S-3 to my home network for music playback via the Ethernet port. The setup of the network connection was done quickly and easily with the help of the large display on the S-3 and the well-illustrated manual. Using the Media Server feature, the S-3 will then display a list of music servers available on the Music Network. During the import phase, as a media server, I used Asset UPnP, which is available for a variety of platforms. Another alternative would be MinimServer or Twonky Server. Controlling a media server is most comfortable with a UPnP controller app for a tablet or smartphone. An in-house Ayon app is currently unavailable which is not a problem as there is a wide range of third-party apps available. I took turns using PlugPlayer and Kinsky on my iPad. The interaction of these apps with the S-3 and Asset UPnP worked fine.

For my actual hearing test, however, I used my personal favorite JRiver as a media server, but it can not be installed on any network disk. The control was very comfortable with JRemote on my iPad. On the output side, the S-3 was connected directly to my Omtec power amplifiers. 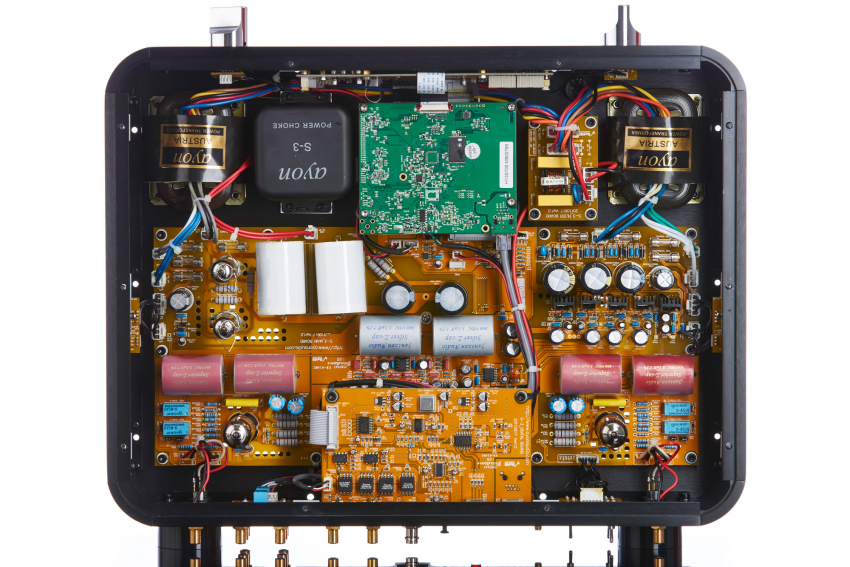 The first thing I hear on a hot summer evening is the album “Hell Freezes Over” by the Eagles (XRCD): the S-3’s all-time hit “Hotel California” delivers the live atmosphere with great clarity and transparency is really fun; In addition there is a powerful, always crisp bass. On “Wonderland” by Nils Lofgren ( Acoustic Live ) every touch of the guitar and the resulting sound is perfectly captured. I have rarely heard it as vividly as with the S-3. 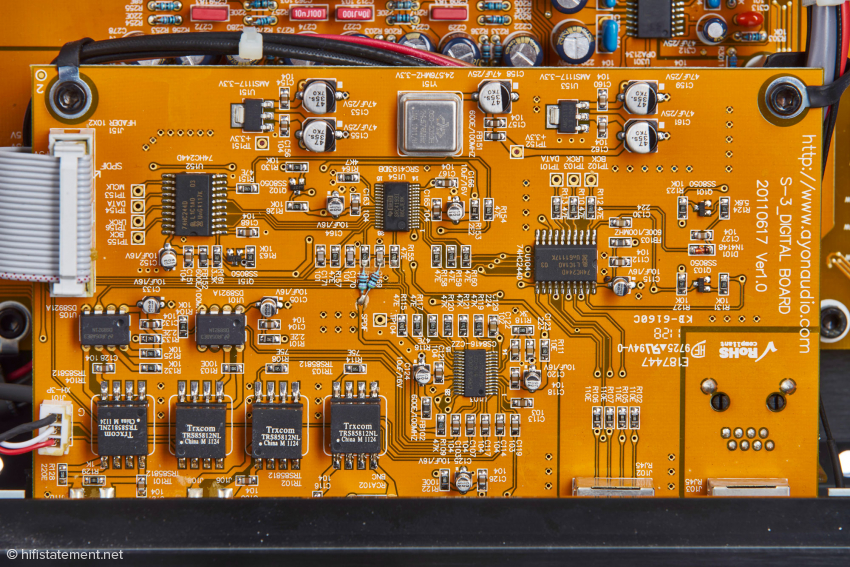 Part of the digital section with the interface modules

With its tonal abilities, the S-3 is able to fabulously bring out the differences between different recordings and interpretations of the same piece: On the first movement from the Symphony No. 41 by WA Mozart, the Royal Philharmonic Orchestra under René Leibowitz ( Mozart Symphony 35 & 41 ) wonderfully soft and large in the best classical tradition. The S3 opens a wonderful room here with great breadth and depth, whereby the individual groups of instruments in their entirety are clearly delineated. In complete contrast to this is the Freiburg baroque orchestra of only 35 players under René Jacobs ( Mozart, Symphonies 38 & 41) with its extremely analytical interpretation of the smallest details and rugged “black and white contrasts”. Here, the S-3, the brilliance of the violins starting, but without unpleasant sharpness, the bass contours powerful and the timpani tough again.

Impressive are the abilities of the S-3 with good HiRes recordings: The reproduction of the 1st movement from the Sinfonia Concertante for Violin and Viola by Mozart with the Camerata de Lausanne (Mozart, Sinfonia Concertant ) becomes a pure pleasure. Striking dynamics coupled with stupendous spatiality, which make the interplay between the two soloists and the orchestra particularly impressive. 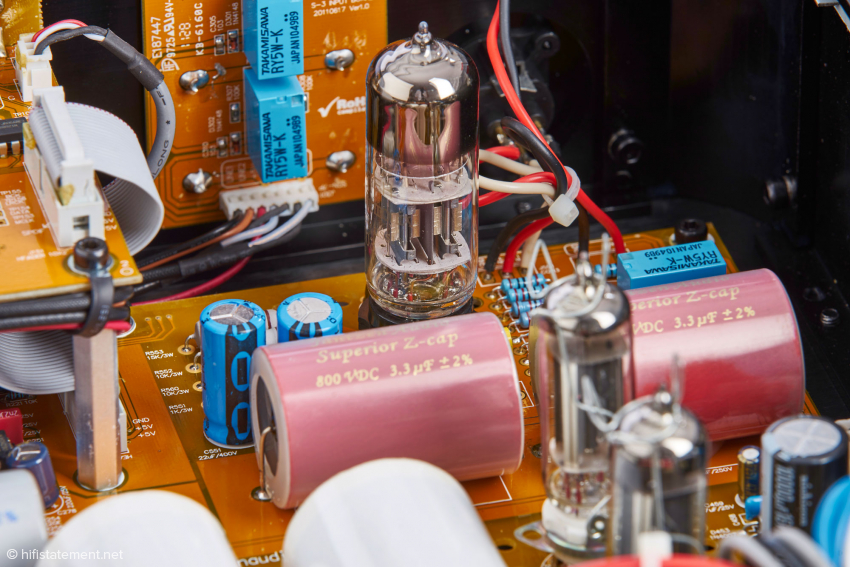 The double triode 6H30 in the output stage and film capacitors from Jentzen as coupling-C.

After many hours of intense listening, one thing is clear to me: The outstanding feature of the S-3 for me is its transparency and clarity in the reproduction, which is presented without a hint of sharpness. About the analog inputs, the S-3 proves to be an excellent preamplifier. It’s quite obvious that the tube output stage makes a significant contribution to the great sonic capabilities of the S-3. For me a clear proof of how important a good line level is with a digital / analog converter. A circumstance that is often neglected.

On the other hand, it makes it too easy if you wanted to reduce the S-3 to its excellent tube output stage. I think the super sound of the S-3 is due to the perfect technical integration and tonal tuning of the streaming unit, digital-to-analog converter and output stage combined with great perfection in every little detail. Once again it turns out that in a chain, it’s not so much about outstanding parts, but rather about the perfect coexistence of all parts. 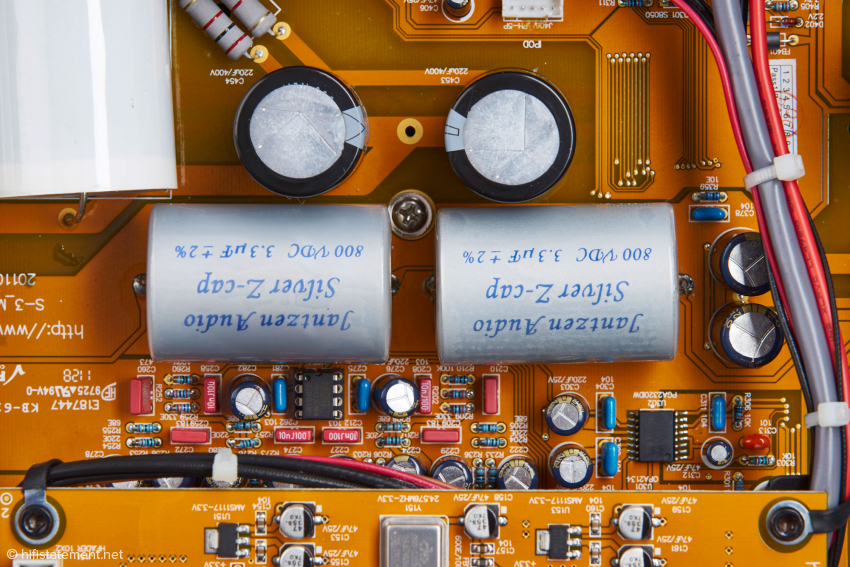 The S-3 is a top-of-the-line network player with full-fledged Class A triode tube preamp and intriguing sound.